Back to all posts

I thought that I’d write a quick post here. It’s been so long!

Frankly, I only have so much time to devote to my “music hobby”, and I’ve been using that time for other things. I’ve been doing a lot of concerts (well, a lot for me), and they have been with various themes and set lists. I’ve also been writing new material, and I am excited to announce that I plan to record again in June. I’ve got my flight booked for June 28th, and I will record 3 of my songs on June 29th and 30th. It will be a brief trip, but hopefully productive. 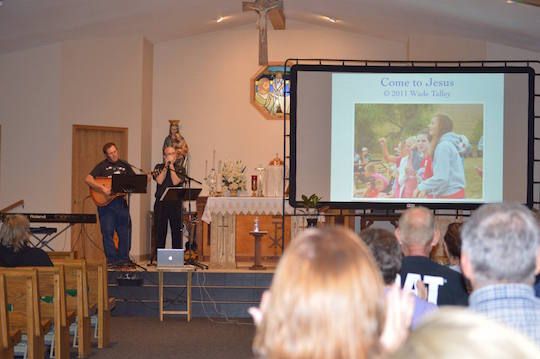 Wade and I at a performance in Wetmore, KS

I plan to play harmonica on a couple of his songs, and perhaps sing on a song or two. We will see how his session goes in May, and I’m sure he and the producer, David C. Smith, will have a clearer idea of what my role might be after that.

As for me, I plan to record “Love Means Sacrifice”, “Vain”, and “No Hay Otra Manera”. My hope is that these songs will be part of an upcoming album, but I will need additional funding if that will be possible. I am looking at doing another Kickstarter campaign later in the year. All three of these songs have been “concert-tested”, and they seem to have been well-received. I think that they are very much ready for the “professional treatment”. “No Hay Otra Manera” is the first song that I have written in Spanish (the title means “There’s No Other Way”), and people have really asked for a recording of that song. “Love Means Sacrifice” and “Vain” have really been fun to play in concert and are a couple of my new favorites (particularly “Love Means Sacrifice”).

The broader theme I have in mind for the upcoming album is about things that I’ve learned or said or done over and over again as a pastor. The working title of the album is “Pastor”, and I’m very excited about the songs that I’ve got ready for the album.